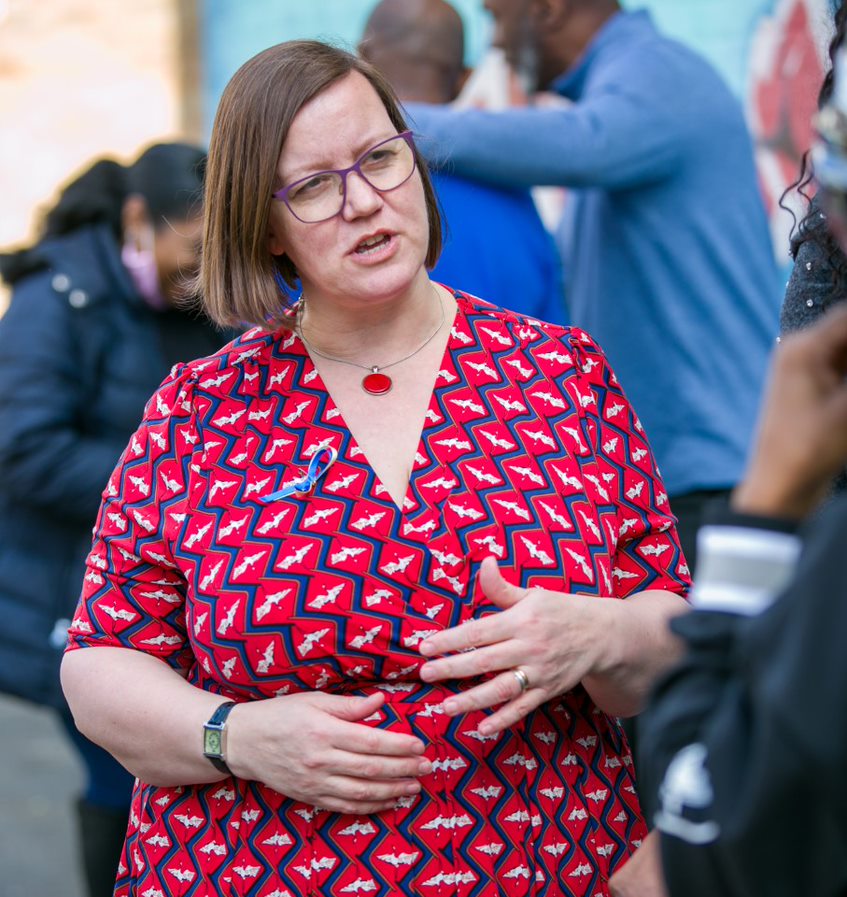 It is two years since the murder of George Floyd and the Black Lives Matter protests that followed. See below for an update on my work in fighting for racial justice.

Child Q
I was appalled to read the City & Hackney Safeguarding Children Partnership’s review into the incident with Child Q. This was a young black girl who was on her period and was strip-searched by police officers at her school without an appropriate adult present because she allegedly smelt of cannabis. The review found that Child Q was traumatised and required therapy after being forced to expose her intimate body parts during the search. Read the report in full here.

This was a failure on every level with no consideration given to safeguarding a child. These actions cannot be justified. No child should be humiliated and traumatised. The review concludes that racism is likely to have been an influencing factor in the decision by police to undertake the strip search. I have raised these serious issues directly with the Metropolitan Police and other relevant bodies. The matter is now being investigated by the Independent Office for Police Conduct (see more here). While the IOPC has an important role its involvement often delays normal disciplinary action being taken against the officers involved in an incident. The removal from frontline duties of the officers involved here is the bare minimum.

There are many ongoing issues that this case highlights about the treatment of young black people and wider stereotyping. I am working with local youth groups and others to promote and develop a better relationship locally.

Metropolitan police culture
The shameful incident with Child Q is part of a pattern of behaviour by some officers in the Metropolitan Police. Black men and women, who experienced prejudice when they were young are still seeing their children being stopped and searched far more often than their white counterparts. The anger is palpable and the hurt is real. Much more needs to be done in the short term.

I raised concerns about the culture inside parts of the Metropolitan Police at a debate in Parliament and called on the Government to step up and do more to fix relations. For instance, it could introduce proper training into our schools. We have policing by consent, but we need to equip our young people so that they know what their rights are. Importantly, we need strong new leadership to change the culture at the Metropolitan Police, and that needs to happen now. I also believe it’s time to separate out the responsibility for counter terrorism and the leadership of the Met. We need a London police service that is focused on serving its communities.

Domestic abuse support for black and minority ethnic women
I spoke in a debate about support for black victims of domestic abuse and urged the Government to support Valerie’s law. This proposal is named after a constituent, Valerie Forde, who was brutally murdered with her 23-month-old daughter, Jah-zara, by her ex-partner. Valerie’s law would mandate specialist cultural competency training for police officers, relevant government agencies, and domestic violence safehouse staff so that black and minority ethnic women affected by domestic abuse are appropriately supported.

The statistics behind this issue are stark. Between 2016 and 2020 police forces were one and a half times more likely to bring forward a charge when the victim or survivor was white than when they were black. The number of high-risk domestic abuse cases heard in Hackney increased by 20 per cent in the first year of the pandemic. There is an urgent need for change and better support. Some of the lack of support is about misunderstanding, some of it is about unconscious bias, and some of it is about racist attitudes that lead to stereotyped views of how black women are treated. Supporting Valerie’s law would be a simple and propionate step by the Government, but it must also do more. Cuts to local authority funding have meant small specialist organisations that work with specific groups, such as black women, often find it hard to compete for contracts. The Government must fund and properly resource local authorities so this can also change. See here to watch my speech in full.

Rwanda
The Home Secretary attempted to distract from the Prime Minister’s bad behaviour partying during lockdown by announcing a new policy of deporting asylum seekers to Rwanda. I challenged the Home Secretary on why she could not answer basic questions about how much taxpayers' money will be spent on sending victims of war and persecution to Rwanda. The fact she could not answer underlines that this policy is more about a cheap and anti-immigrant headline than anything else (see here). These plans are shameful, unworkable, and will not break the business model of people traffickers and smugglers which is the Home Secretary’s argument for introducing it. I’ll keep pressing the Government on this.

TOEIC scandal
Lives have been ruined due to the Government’s actions against those falsely accused of cheating on their English language tests for visas. After evidence of organised cheating was uncovered in 2014, the Home Office reviewed the visa applications of everyone who sat the Test of English for International Communication (TOEIC) exam. It worked with the international testing organisation that set the TOEIC exam, ETS, to identify cheating students. But despite proof of systemic flaws in ETS’ data, resulting in many innocent people being wrongly accused of cheating, the Home Office continues to stand by the evidence supplied by ETS.

People falsely accused of cheating had their visas cancelled with no right of appeal, no ability to challenge the decision, and no right to see the evidence against them. Only in 2017 was the right to appeal in Britain won by people caught up in the TOEIC scandal. But more than 2,500 people have been deported and at least 7,200 have been forced to leave the UK.

Many have gone to court and proved the Government wrong, but at great cost to themselves and the British taxpayer. The simplest, fairest, and most cost-effective solution for everyone is to allow those accused of cheating to re-sit the test but the Government is so far refusing. This scandal feeds into a wider pattern of behaviour and culture in the Home Office, as seen with the Windrush scandal. The Government must change tack.

The Public Accounts Committee looked at this issue in 2019. ETS paid £1.6 million to the Home Office in a settlement over its role in the TOEIC scandal. But the TOEIC scandal has already cost the taxpayer £21 million.

Nationality and Borders Act
The Nationality and Borders Bill has passed all its parliamentary stages and is now law. This is the Act that imposes unacceptable restrictions on the right to claim asylum in the UK. The war in Ukraine casts these provisions in an even more damning light. The Government’s rhetoric doesn’t match up with the reality. It is proposing unworkable solutions that will cost the taxpayer and won’t do anything to stop the dangerous crossings that are putting lives at risk. It also undermines international cooperation and refugee conventions at a time when all countries need to do their bit to help with the crises in Ukraine and Afghanistan. I voted in support of amendments that would place a requirement on the UK to resettle at least 10,000 people a year; to remove proposals to introduce differential treatment of refugees based on method of arrival; to remove provisions relating to the offshore processing of asylum seekers; to remove the offence of arriving in the UK without clearance; to put in place a framework to provide proper constraints on the use of age assessments; and to allow asylum seekers the right to work where they are still waiting for a decision after six months. However, due to the Government’s majority, these amendments were defeated and the bill is now an Act of Parliament.

COVID-19 inequalities
There is clear data detailing the disproportionate impact of the COVID-19 pandemic on black, Asian, and minority ethnic communities. It is encouraging to see that the COVID-19 inquiry will examine this during its work, although its terms of reference on this are broad in their scope. There is a need to make it more focussed. I’ve joined forced with other MPs to call on the Chair of the COVID-19 inquiry, Baroness Hallett, to ask for the Federation of Ethnic Minority Healthcare Organisations (FEMHO) to be granted Care Provider status. FEMHO is a group of individuals, organisations and networks that represent minority ethnic workers in the health and care sectors. Granting it Care Provider status will mean their voices and experiences can be fed into the inquiry.

COVID-19 vaccines
The racial disparity in take-up rates of the COVID-19 vaccines is a public health inequalities scandal. The vaccines are our best protection against falling severely ill with COVID-19. I applaud the excellent work of the NHS and all those that have helped with the vaccine roll-out in Hackney. If you have still not received your first, second, or booster dose, it is not too late. See here for details of where you can pop in to talk about any concerns you may have and to receive your jab.  If you have concerns or know someone who does, you can also point them to some of the excellent resources available online including Hackney’s Director of Public Health, Dr Sandra Husbands’, FAQ video here or Hackney Council’s vaccine booklet here, which is available in most locally spoken languages.

Black maternal health
Black women are four times more likely to die during pregnancy and childbirth than their white counterparts. This statistic is a snapshot of the wider health inequalities faced by black and minority ethnic mothers and their children. I’ve signed the Five X More MPs Pledge to draw attention to this overlooked issue and join forces with other MPs in campaigning for the Government to act. I have written to the Secretary of State for Health and Social Care and urged him to improve maternal outcomes for black women as well as implement the recommendations on black maternal health in the Human Rights Select Committee report “Black people, racism and human rights” (see here to read the report). I have also asked our local NHS trust what it is doing locally to improve outcome for black mothers. It is welcome the Government has launched the Maternity Disparities Taskforce, which is exploring inequalities in maternity care (see here for a recent update). But there is still more work that needs to be done. I will be holding a virtual roundtable so black Hackney women can feed in their experience. If you like to register your interest in attending this roundtable, please email meg.hillier.mp@parliament.uk with your full name and postal address.

Young leaders for sustainable cities course
Voyage Youth are pioneering a new BTEC (Level 2) course for the black climate leaders of tomorrow. It is offering 100 places (50 boys and 50 girls) to its Young Leaders for Sustainable Cities programme. The programme will train young black people on how to prepare for a career in the sustainability sector, offer volunteering and work experience opportunities with partner conservation charities, and teach students how black people are disproportionately affected by climate change, air pollution, and a lack of access to green space. The course will take place on Saturdays and during the half-term holidays from September. The course is largely a free opportunity for the young people involved although Voyage Youth do look for a contribution to costs from schools – this is capped at 10 per cent per person (no more than £150 per person, although sometimes this can be less). See here for further information and see here for information on Voyage Youth’s other smaller courses, such as Project Sankofa.