Meg calls for a delayed return for Hackney primary schools 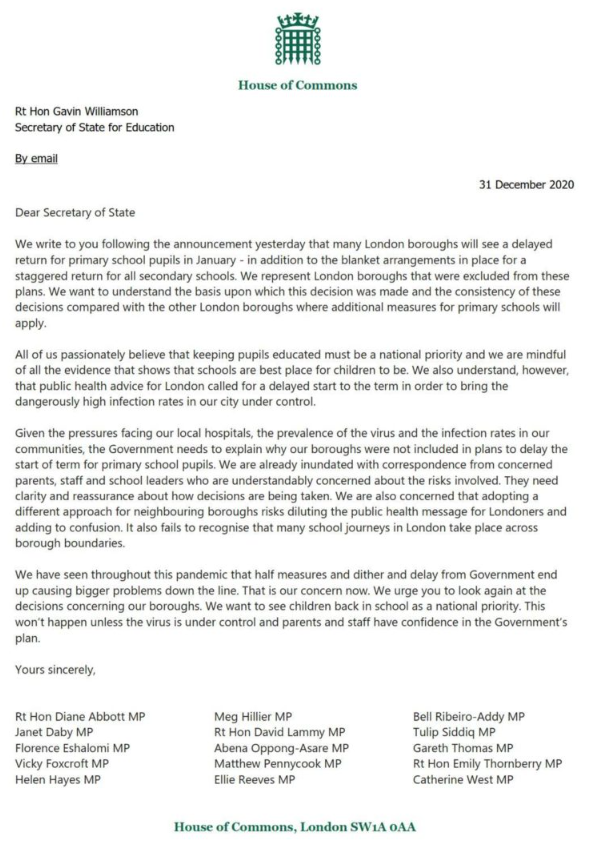 On the 31 December 2020, the Government announced that Hackney primary schools were excluded from the list of boroughs whose school terms were due to be delayed on public health grounds.

This decision did not reflect the advice for London from public health experts. I joined colleagues to call on the Secretary of State for Educaton to urgently reconsider this decision. See the full text of the letter below.

The Government has since announced a delayred return for all primary schools in London, including Hackney. For further details see here.

All of us passionately believe that keeping pupils educated must be a national priority and we are mindful of all the evidence that shows that schools are best place for children to be. We also understand, however, that public health advice for London called for a delayed start to the term in order to bring the dangerously high infection rates in our city under control.

Given the pressures facing our local hospitals, the prevalence of the virus and the infection rates in our communities, we do not understand why our boroughs were not included in plans to delay the start of term for primary school pupils. We are already inundated with correspondence from concerned parents, staff and school leaders who are understandably concerned about the risks involved. We are also concerned that adopting a different approach for neighbouring boroughs risks diluting the public health message for Londoners and adding to confusion. It also fails to recognise that many school journeys in London take place across borough boundaries.

We have seen throughout this pandemic that half measures and dither and delay from Government end up causing bigger problems down the line. That is our concern now. We urge you to look again at the decisions concerning our boroughs and to reconsider. We want to see children back in school as a national priority. This won’t happen unless the virus is under control and parents and staff have confidence in the Government’s plan.